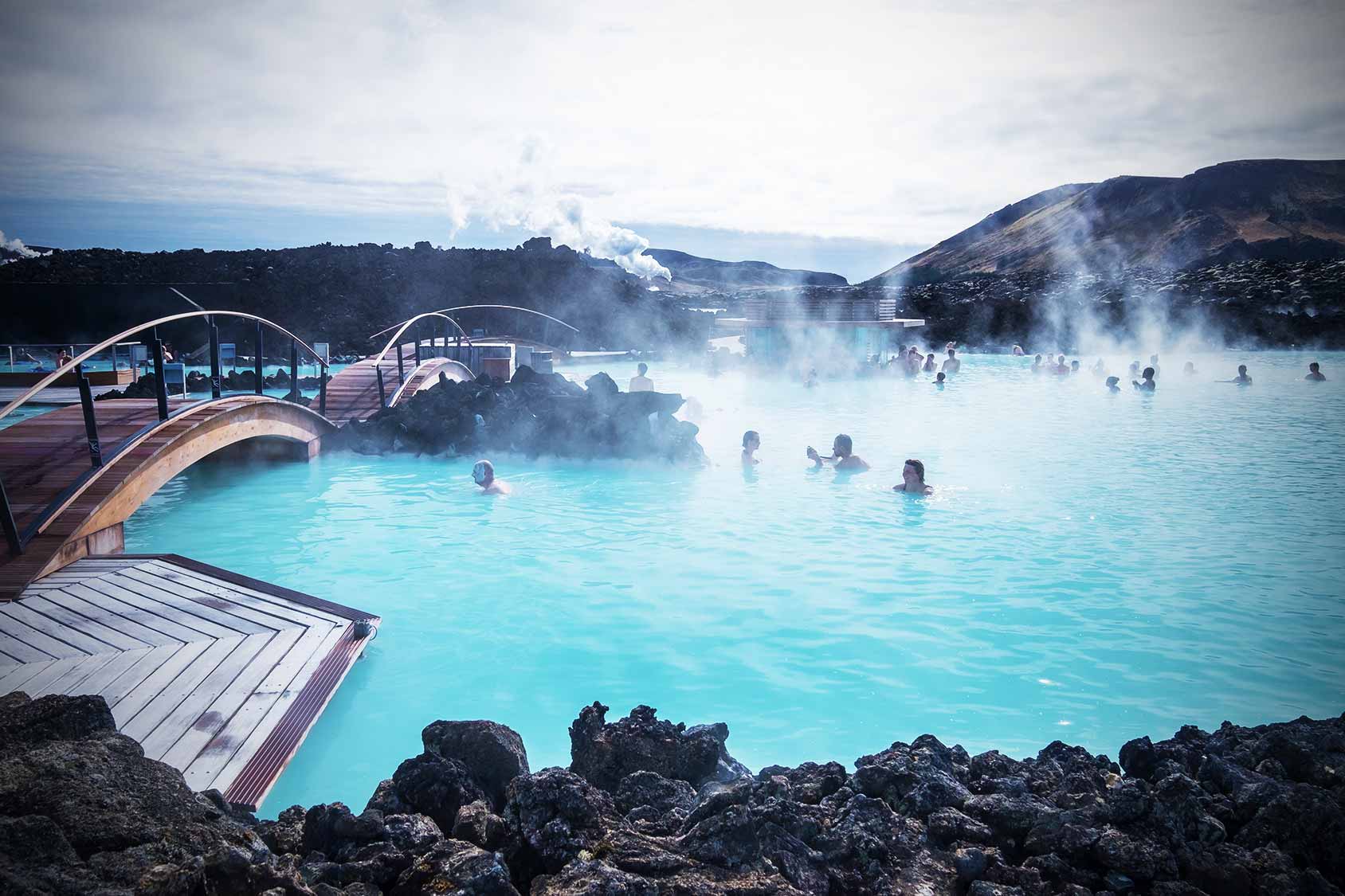 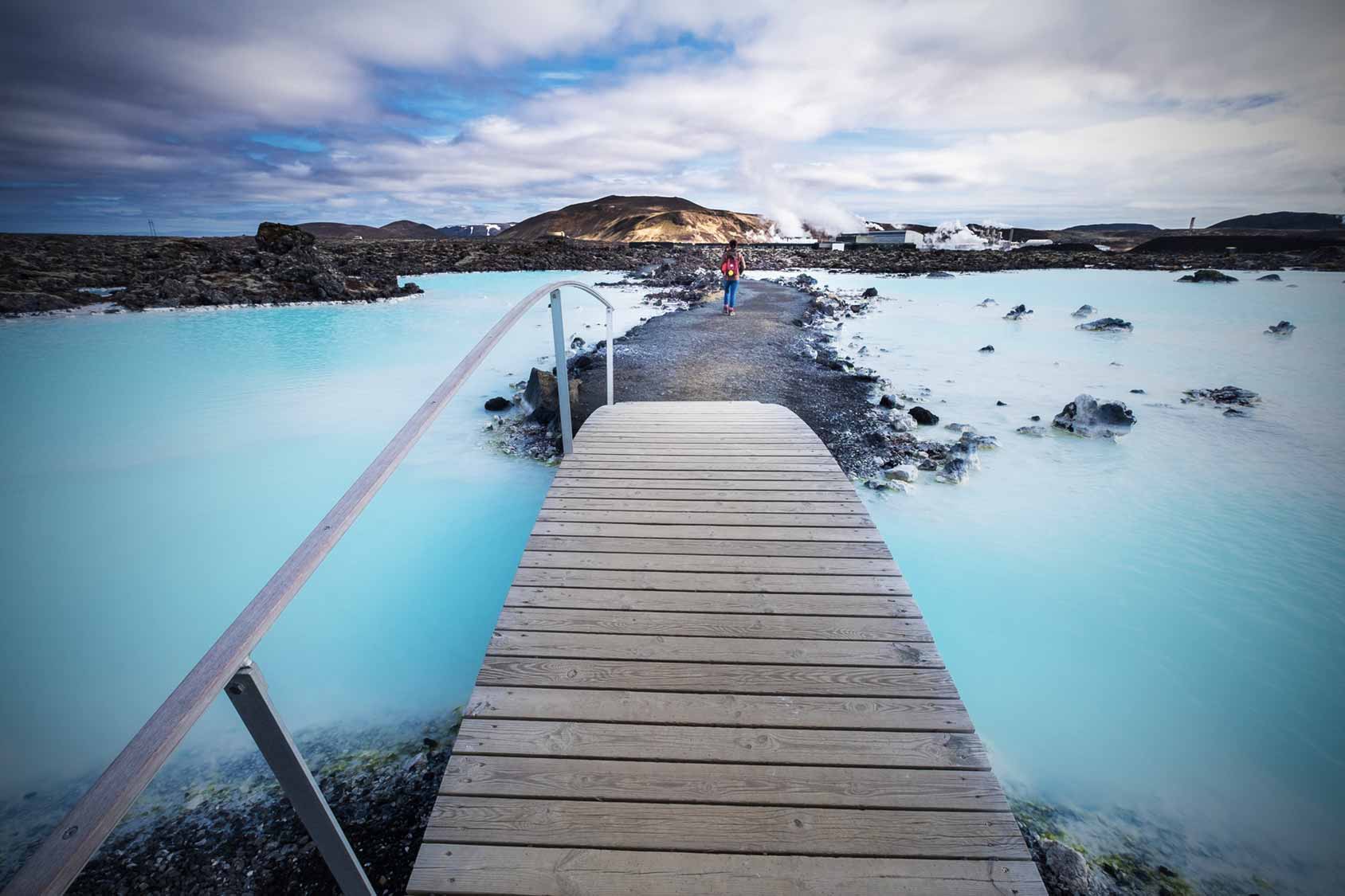 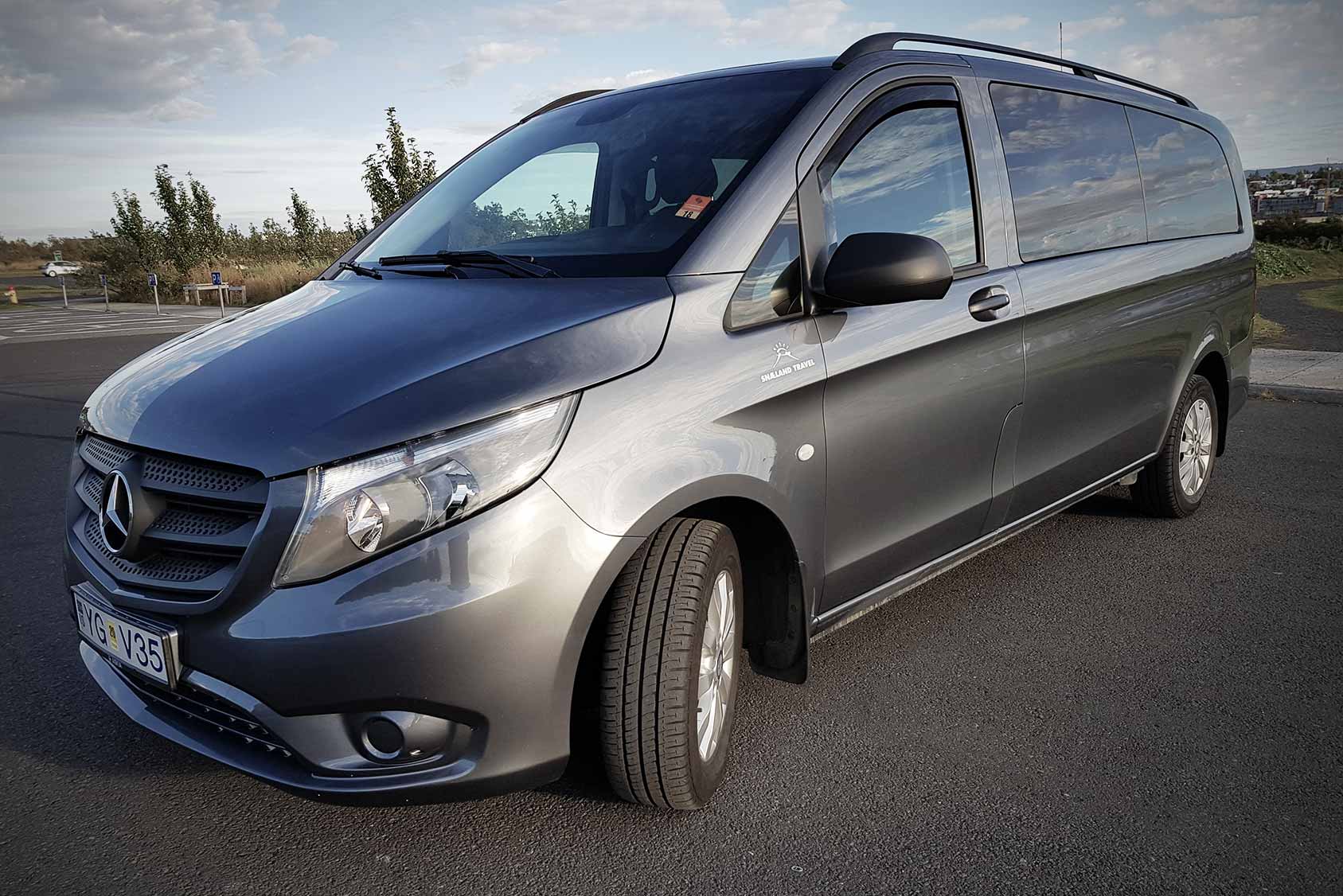 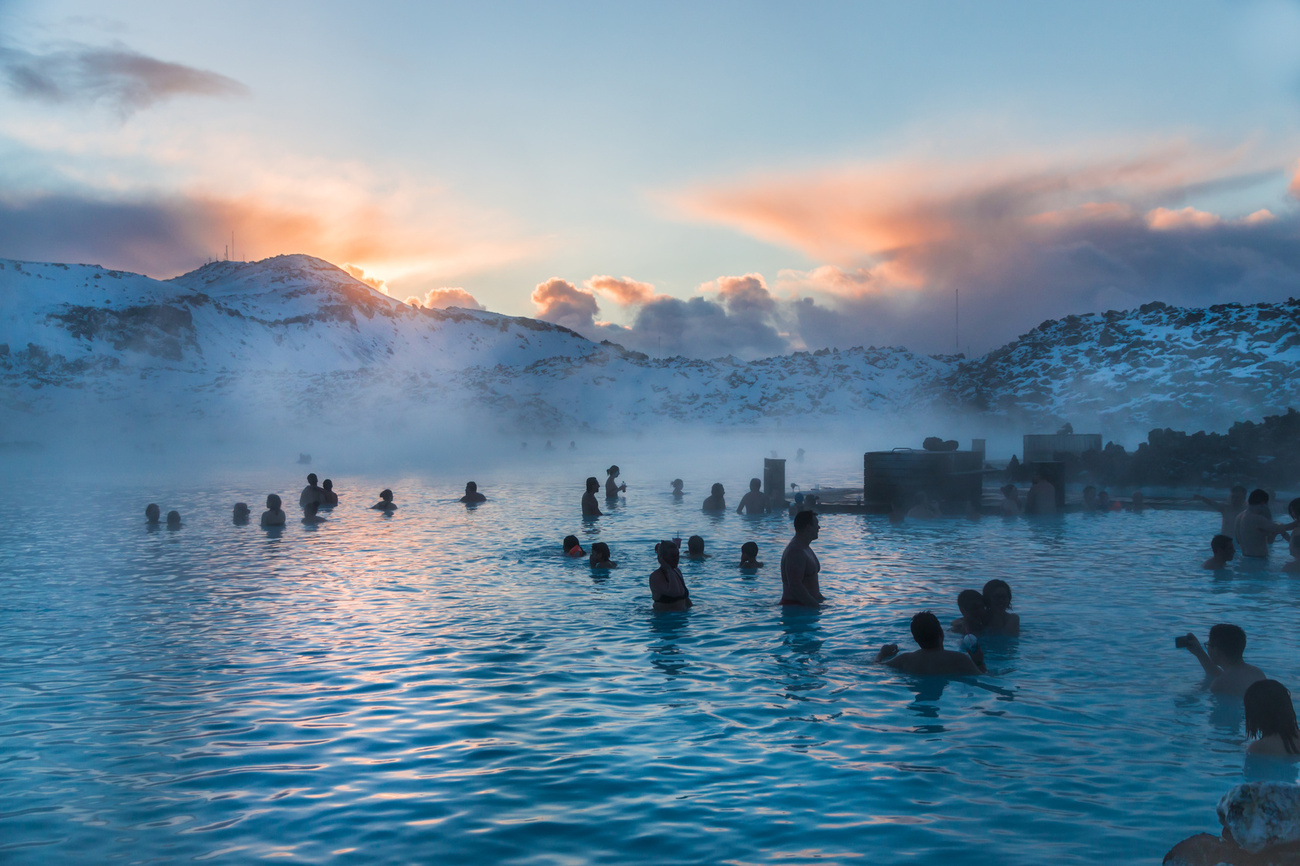 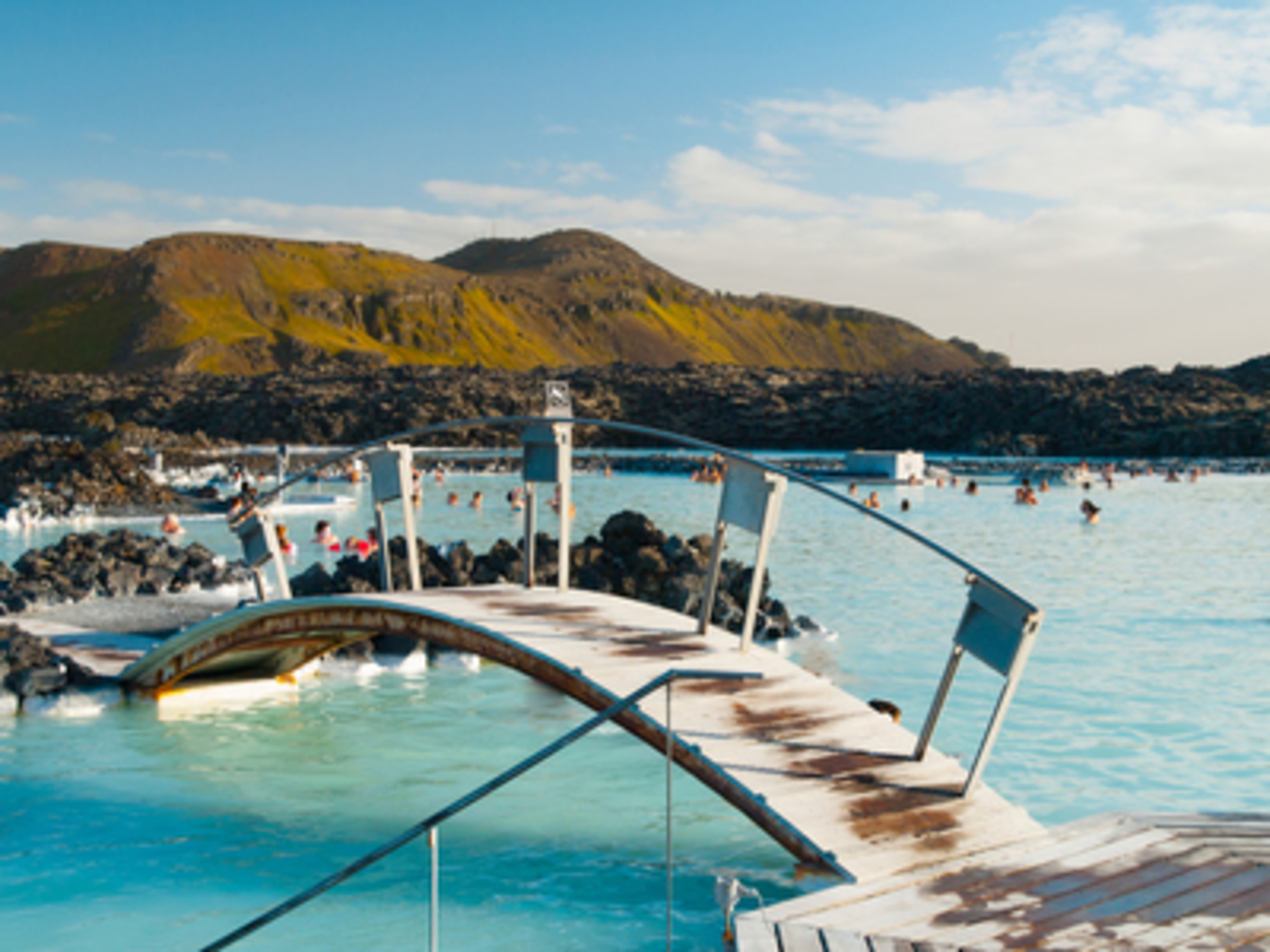  back
The Blue Lagoon

The Blue Lagoon is one of the most popular destinations in Iceland and should be on every list of things to do when visiting the country. Situated in a vast lava field on The Reykjanes Peninsula close to Keflavik International Airport and Kleifarvatn Lake, and around 45 minute drive from Reykjavik. Legend has it that can wash away all your sins and look ten years younger in the process. Be that as it may but The Blue Lagoon is a geothermal spa filled with natural earthsea and silica mud which has restorative properties to the skin and stays at a comfortable average temperature of 37°C and completely renews its waters over a period of 36 hours.

A visit to The Blue Lagoon can easily be combined with an airport transfer or a tour of the Reykjanes Peninsula visiting hot springs and mud pools and other aspects of being right on top of the Mid Atlantic Ridge between the tectonic plates. Geothermal activity is everywhere in this area and a lot of research is done here on the harnessing and distribution of geothermal energy, including a geothermal power plant and pipelines bringing the natural hot water from its source to homes in the area. Some of this looks like something straight out of a Science Fiction Film and of course Iceland has been featured in a few of those. The first astronauts to go to the moon also spent time here practicing and testing equipment back in 1966. This is the environment of the most popular retreat spa in Iceland and people come from all over the world not just to enjoy a couple of hours here but also for treatments and extended stays. There are also two excellent restaurants operating in The Blue Lagoon, Lava restaurant and Moss restaurant.

The proximity to Keflavík International Airport and Reykjavik City make The Blue Lagoon an ideal part of just about anything you do in Iceland. Any time of year is a good time to visit here and there for example quite a few good places nearby to experience the Northern Lights should they appear in the night sky.

The Blue Lagoon has been awarded numerous times and is on just about every summary of great spas in the world. The healing waters and otherworldly surroundings make it an absolutely unique experience and the staff works hard to make sure that everyone feels comfortable and gets the best out of their time here. 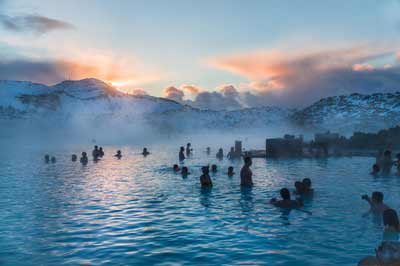 
The Blue Lagoon
A world class spa where you can wash away all your sins and look ten years younger in the process.
 back
Reykjavík captal city

Reykjavík is the capital of Iceland, the world´s northernmost capital and around two-thirds of the total population of the country live in and around the city. The oldest archeological remains of a permanent settlement in Iceland are right in the city center dating back to 874 and believed to be that of Ingólfur Arnarson the founder of Reykjavík according to the sagas. Reykjavík really just became a city during the 20th century. In 1900 only about 6000 people were living in reykjavík at the time. During WW2 the city grew significantly and during the war the allied forces built many roads as well as the domestic airport, and the international airport, as well as setting up their headquarters and army barracks. The second half of the 20th century was pretty quiet but included highlights such as the world championship in chess in 1972 when Bobby Fischer became world champion. In 1986 the world cast its eye towards Iceland when then USA President Ronald Reagan and USSR General Secretary Mikhail Gorbachev met for a summit in Reykjavik which is considered an important stepping stone towards the end of the cold war and disarmament. But apart from WW2 Reykjavik has been a pretty cool little place, a breeding ground for artists and infamous for a colourful nightlife.

Reykjavik City has become a hip destination lately for people seeking northern lights, music festivals and the new Icelandic fusion cuisine. A number of amazing day tours can be taken from the city that are back before happy hour and give you plenty of time to relax in one of the geothermal swimming pools and check out what is going on at the Harpa Concert Hall. In summertime the Secret Solstice music festival is a major event, so is Culture Night and Gay Pride weekend. In winter there are the Iceland Airwaves and Sonar music festivals both drawing international crowds. Although Reykjavik is the northernmost capital in the world, thanks to the hot springs and geothermal heat it quite warm on the inside and 90% of all homes in Iceland are geothermally heated. So, only green energy for this capital city on the shores of Faxaflói (Smoky Bay) guarded by the great Mount Esja.

There are many ways to experience Reykjavik. Whether you go by foot or get someone to give you a little road trip around the city make sure you get in a few highlights. Perlan observation deck, Hallgrimskirkja lutheran church, Harpa Concert Hall, City Hall and The Pond (Tjörnin) are all well worth checking out. Make sure you find out where there is free entry and were you need to pay. Getting a private driver to take you around is really the best way to get everything in make sure you get a proper introduction. 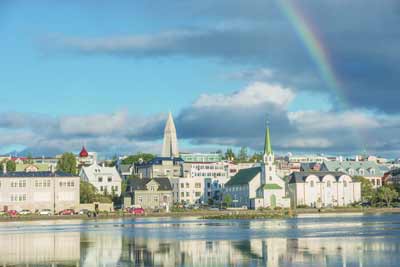 
Reykjavík captal city
The northernmost sovereign capital in the world has some warm and intriguing sides.

The Blue Lagoon is a must for all visitors to Iceland and a favourite to all those who have visited Iceland. An amazing spa situated in the lava fields between Keflavik International Airport and Reykjavik. The Reykjanes peninsula has a few geothermal areas with steam rising from mud pools and hot springs reminding us that we are right on top of the mid atlantic ridge. A visit to the Blue Lagoon has been at the top of the list for main attractions in Iceland for some time now.

The silica mud there is said to rejuvenate so much that people look up to 10 years younger and the waters so healing that sins get washed away while soaking in the geothermal pools. Anytime is a good time to visit the Blue Lagoon and it can easily be combined with an airport transfer, a Reykjanes Peninsula Tour or a Northern Lights Tour, and it's only a 45 minute drive from Reykjavik.

There are a few other attractions in the area such as the Bridge Between Continents and Seltún geothermal mud pools, but the Blue Lagoon is by far the most popular one. There are various treatments offered at the Blue Lagoon and it has its own line of skin products made from the silica mud which have been very successful and highly rated. For those who wish to spend more time here the Lava Restaurant is an excellent option for either lunch or dinner, as well as the Moss Restaurant for a special dinner.

Reykjanes Peninsula Private Tour
A tour of the peninsula in the south west of Iceland
Price per vehicle from:
loading
Duration

5-6 hours
book now
Energetic 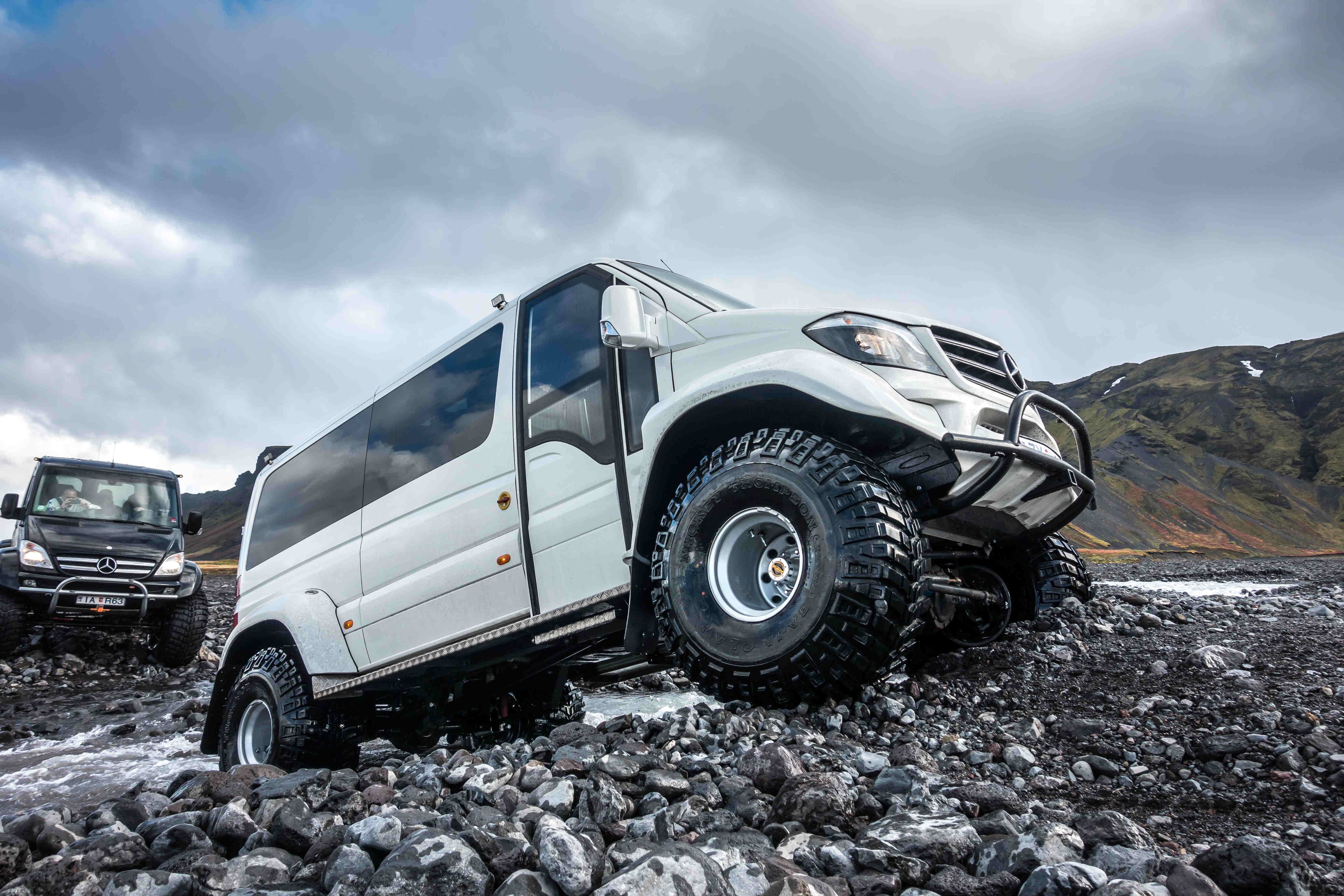